PASADENA, Texas - San Jacinto College celebrated the grand opening of the new Anderson-Ball Classroom Building, Tuesday, Aug. 16, with a ribbon cutting and the presentation of a new award.

Elected officials, Board of Trustee members, and San Jac administration and faculty were on hand for the grand opening of the new building, which features beautiful wood accents throughout.

“This structure is unlike any other in the United States because it is the largest instructional building on a college campus constructed from mass timber,” said Van A. Wigginton, Central campus provost. “It truly is an incredible space for faculty to teach and for students to learn that highlights the sustainability the College is striving to achieve.”

During the ceremony, Rob Hughes, executive director of the Texas Forestry Association, announced that the Anderson-Ball Classroom Building had recently been named the recipient of the Excellence in Wood Design Award. First presented in 1967, the Excellence in Wood Design Award has become a symbol of outstanding achievement in project designs using wood and wood products in Texas.

“The members of Texas Forestry Association are excited to present this award to San Jacinto College for using mass timber in the design of its newest education building,” said Hughes. “Sustainable forestry practices, verified by third party accreditation, are providing clean air, clean water, diverse wildlife habitat, and products that enrich all aspects of our lives. Mass Timber products are a new avenue supporting millions of acres of working forest lands by utilizing relatively young trees and engineering them into large, usable building components.

“The environmental leadership displayed by San Jacinto College will encourage further use of these new and innovative products that will continue to provide landowners with the economic incentive necessary to keep growing healthy forests right here in Texas.”

Originally on the land were the Anderson Tech and Ball Tech buildings, which were built in the late 1960s. The programs in those buildings have since been moved to new locations, allowing this 122,000-square-foot space to house math, pre-engineering, college prep, English and humanities programs.

In the main lobby, 40-foot laminated black spruce columns support double beams spanning the planked ceiling. Opposite one of the lobby entrances is a bas relief, repurposed from the exterior of one of the original buildings, which stands as a focal point and homage to the building’s programs.

Mass timber – created by laminating wood layers together in either parallel or cross patterns – replaces conventional structural steel throughout the Anderson-Ball structure. San Jac received a $100,000 U.S. Forest Service University Mass Timber grant to defray the cost of learning how to approach projects of this type. San Jacinto was the only community college recipient to receive this grant, in addition to eight Tier 1 research universities.

In July, the Anderson-Ball Classroom Building was named Best Project, Higher Education/Research by a panel of industry experts for Engineering News-Record Texas & Louisiana. The project was nominated by construction partner Tellepsen Builders.

The Anderson-Ball building is the last of several new facilities throughout the district that were approved in 2015 through a $425 million bond referendum approved by voters. The referendum allowed San Jacinto College to build new facilities, remodel nine buildings that are at least 30-years-old and update infrastructure and security.

For more information and updates to the newest construction projects, visit sanjac.edu/bond. 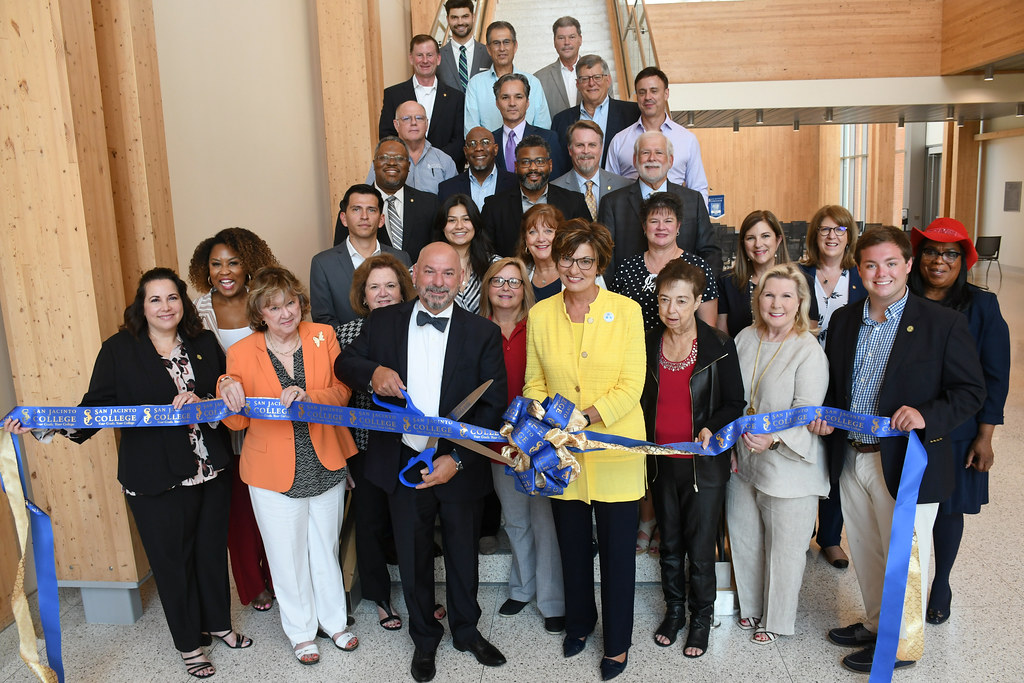 Surrounded by monuments of history, evolving industries, maritime enterprises of today, and the space age of tomorrow, San Jacinto College has served the people of East Harris County, Texas, since 1961. San Jacinto College is among the top five community colleges in the nation as designated by the Aspen Institute for Community College Excellence, and was named an Achieving the Dream Leader College of Distinction in 2020. The College spans five campuses serving approximately 41,000 credit and non-credit students annually, and offers more than 200 degrees and certificates across eight major areas of study that put students on a path to transfer to four-year institutions or enter the workforce. San Jacinto College’s impact on the region totals $1.3 billion in added income, which supports 13,044 jobs. The College is fiscally sound, holding bond ratings of AA and Aa2 by Standard & Poor’s and Moody’s.

For more information about San Jacinto College call 281-998-6150, visit sanjac.edu or join the conversation on Facebook and Twitter.